The Sloan Digital Sky Survey (SDSS-III) today announced the most accurate measurements yet of the distances to galaxies in the faraway universe, giving an unprecedented look at the time when the universe first began to expand at an ever-increasing rate. The results, announced today in six related papers posted to the arXiv preprint server, are the culmination of more than two years of work by the team of scientists and engineers behind the Baryon Oscillation Spectroscopic Survey (BOSS), one of the SDSS-III’s four component surveys. 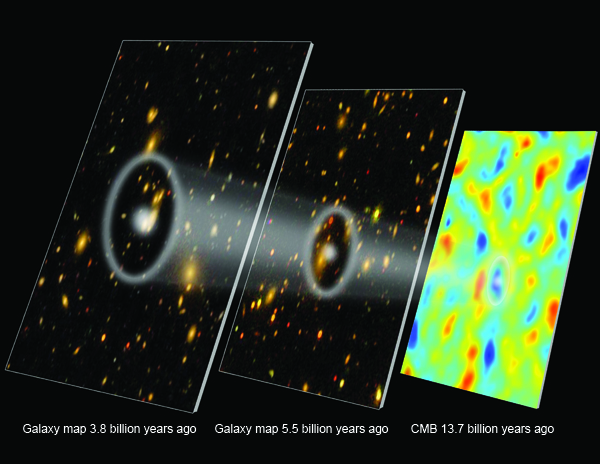 BOSS scientists announced these results today at the National Astronomy Meeting (NAM) in the UK and will present them at the American Physical Society (APS) meeting in the US on Sunday. These new results provide the best measurements yet that directly compare the distance to galaxies 6 billion years ago and the cosmic microwave background from 13.7 billion years ago. This measurement is thus a key part of determining the nature of dark energy that is currently accelerating the expansion of the Universe. The BOSS results focus on the era when dark energy first emerged as a significant player in the Universe. By understanding how it began to dominate the Universe’s expansion, SDSS-III scientists hope to be able to reveal more about this mysterious substance that makes up 70% of the mass-energy of the Universe.

For more information and reference to the papers, see the SDSS-III press release at

3 thoughts on “The Beginning of Dark Energy”