Planets around other stars (exoplanets) can be discovered by measuring the motion of a star along the line-of-sight to Earth (its “radial” velocity). In the last 15 years, almost one thousand exoplanets have been discovered, revealing a surprising diversity in exoplanet masses and orbits about their stars. However, the exoplanets discovered through radial velocity searches have come from a heterogenous mixture of different surveys, telescopes, and samples. The goal of the SDSS-III MARVELS survey is to conduct a systematic controlled survey to produce a large sample of giant exoplanets that can be used to test theoretical models of the formation, migration, and dynamical evolution of giant planet and brown dwarf systems. Finding planets requires searching many stars with the accuracy and precision to detect the small changes in radial velocity introduced by planets orbiting them. The MARVELS survey thus required an instrument that could look at many objects simultaneously while still preserving precise velocity measurements.

Dr. Ji Wang spent six years as a graduate student at the University of Florida working under Prof. Jian Ge to help develop the innovative Dispersed Fixed Delay Interferometer (DFDI) technique employed by the MARVELS instrument. Unlike traditional high resolution echelle spectrographs often used for radial velocity searches for exoplanets, the MARVELS instrument combines a fixed-delay interferometer with a moderate dispersion spectrographs. This hybrid approach allows for high throughput, high precision measurements of many objects simultaneously. For details on how this technique was used for MARVELS see Ji Wang et al. 2012a and Ji Wang et al. 2012b. 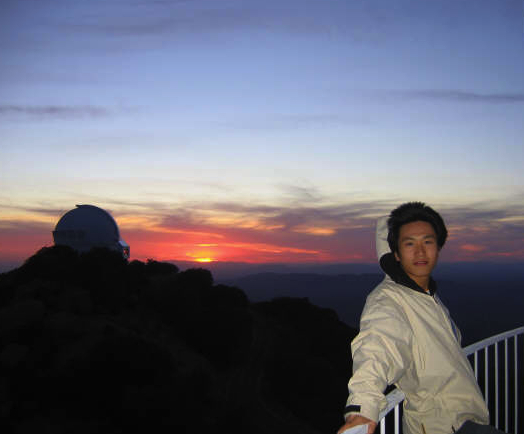 Dr. Ji Wang spent many nights observing as part of the efforts to demonstrate the prototype for the MARVELS instrument at the 2.1-m telescope at Kitt Peak National Observatory (Image credit: PC Guo).

Wang grew up in Guilin, a small city sitting on the bank of the Li River in the far south of China. As a child, Wang was already reading physics and astronomy books; after years of diligence and education, he eventually ended up graduating from the University of Science and Technology of China with a Bachelor of Science in Astronomy. It was after graduation that Wang was faced with an intimidating yet exciting opportunity: a graduate school offer from the University of Florida, ten thousand miles away from home and across an entire ocean.

“It was a culture shock,” admitted Wang. “In China, English was only limited to the classroom. We didn’t really have anyone to practice speaking to.” And yet, despite the fact that this was his first time out of China, Ji not only successfully finished graduate school at the University of Florida with a PhD in Astronomy, but is now thriving as a postdoc at Yale University.

“Among all the courses I took, planetary science interested me the most,” says Wang. It was his deep interest in exoplanets that led to Wang’s involvement in SDSS-III. While he was a graduate student at the University of Florida, Wang initially became a part of the SDSS team by doing the labor-intensive work of cutting, polishing, and assembling fibers. His hard work paid off though, as he was eventually given the responsibility of calibrating and testing the MARVELS interferometer under Prof. Jian Ge. The result was a combination of an interferometer and spectrograph that is able to produce the same precision as a high resolution spectrograph by using less cost and a more compact instrument. The MARVELS instrument also has a multi-object capability; it can measure the radial velocities of 60 stars simultaneously, whereas most spectrographs used for planet searches can generally only look at one star at a time. “The optical path difference of the interferometer, usually referred to as the delay, needs to be very precisely determined,” explains Wang. “A precisely-measured delay is then used to calculate the radial velocity of the star.” The viability of the survey can be attributed in no small part to Wang’s careful calibration of the MARVELS instrument.

The fixed delay interferometer for the MARVELS instrument. This interferometer is capable of interfering light from 60 fibers at the same time and provides a boost of sensitivity to Doppler shifts of a factor of 2. This picture shows the interference pattern of green mercury light in the lab. Each row represents the the light from a different fiber. (Image Credit: Xiaoke Wan)

Not only did Wang influence SDSS-III -– SDSS influenced Wang and other Chinese astronomers long before he came to the United States. “It’s resulted in many quality papers published by Chinese astronomers,” explained Wang. “Ten years ago, China was a lot less involved in international projects. SDSS has allowed China to get in touch with the latest astronomical data, creating a platform that has been a propelling force for Chinese astronomy.”

Now a postdoctoral associate at Yale University, Dr. Wang has recently led a paper that featured a planet discovered by citizen scientists working with data from the Kepler spacecraft as part of the Planet Hunters project, led by Prof. Debra Fischer.

Wang is a young astronomer, yet he has already made an integral contribution to a collaboration that has international influence. However, he believes that it is not only important to get people worldwide involved, but to get people from the general public involved as well, perhaps through projects such as Galaxy Zoo. “A lot of people are interested in space science and planet science. This is a good opportunity to present our results to the public and inspire others to get involved,” urged Wang. “It is our responsibility to invoke interest in astronomy and protect our field.”